In The Book of Noticing, I introduced my collection of walks by sketching out a particular one: a walk to Deep River’s neighboring town of Chester on the 4th of July. Every year, the town hosts the 4 on the 4th Road Race. I have little interest in the race itself, but Chester is a good destination and I like to see the preparations underway.

This morning I celebrated the anniversary of this start of the book with a walk to the same destination. Different time of day: this year the dog got me up at 4, and the sky was already lightening, so I went with it. Different dog: Molly’s memory will forever be held in the book, but now she is buried at the pet cemetery in Fountain Hill, and sometimes Buddy and I stop at her marker.

Our new beagle mix, Buddy, is only 4 and full of energy. He didn’t lag once during the whole, greater-than-2-hour, saunter. It was a circuitous route: various side streets to Maple Street to Chester, then a detour up to Laurel Hill Cemetery, then up through Chester and down Main Street, back via side streets to home.

Buddy checking out the mullein

By the time I approached Union Street, about 10 minutes from home, the sun was showing its face above the horizon, and it washed my neighborhood in muted warm tones. I mused about the many mullein plants peppering my path, their tall shadows standing out in the early dawn light. It’s theorized that the name comes from the Latin word for “soft,” and the herb’s dried down was at one time used for candle wicks. I learned that the stalks used to serve as torches, back in Roman times, and that this often overlooked plant has served many medicinal purposes, from hemorrhoids to asthma. Despite its size, I have always thought it a humble and unassuming plant. I view it as an old friend that visits every summer.

I thought back to my recent weeks at Acadia (see here and here), and how I was literally surrounded by water practically everywhere I went. It’s abundant here, too, but just a bit more work to locate it. From Laurel Hill Cemetery I looked down on the Carini Preserve area, alongside the Chester Creek. I have a favorite spot in the cemetery where I can look over at the Osprey platform planted in the water. Empty! Had the chicks hatched and fledged already? I found myself worrying about their well being. Where were they?

I studied a couple of impressively proportioned rocks—or are they boulders? I had to look up the difference. One forum says that the differentiating factor for the boulder is that it isn’t going anywhere. I hope that’s true for this unusual grave marker at Laurel Hill, pictured below. I wondered about the person or family who decided on the hefty, naturally formed pink granite (I think?) rock bearing only a last name. 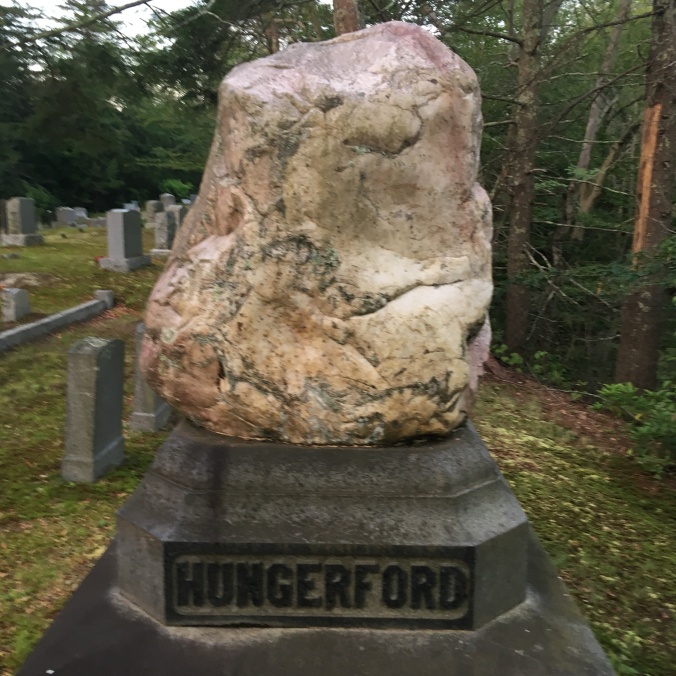 Not far from it was another eye-catching rock (I guess it could be moved, with power equipment, so thus it’s not a boulder?) in the creek itself. It’s become a haven for wayward plants. 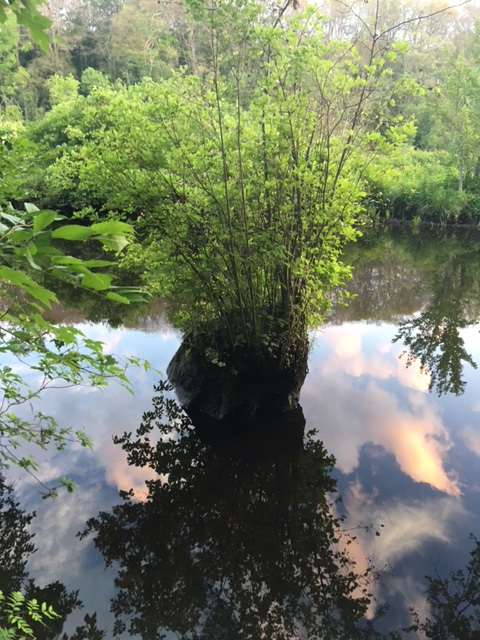 Today I felt an appreciation especially for the plants along my path. I mused about some of the flowers that might be considered “weeds,” since they don’t seem to have been planted intentionally. Actually, I like the term “volunteers” much better. I was amused by my Web research on volunteer plants when I got home, mostly with a gardening perspective, with titles like, “What’s Up with Volunteer Plants?”  and “Should You Keep Volunteer Tomatoes?”  (While to me the answer to tomatoes should always be yes, apparently this is a controversial issue in some circles).

Seeds have so many ways of arriving and blossoming: our compost, the creatures that come and go from our gardens, plants reseeding. Whether we want them there or not, there they are, proud in their innovation and persistence. The many routes that a seed can take are good reminders of the surprises in life, and also of the boundless opportunities to grow, even in unlikely scenarios.

Which brings me back to The Book of Noticing and its origins. Long, long ago, I brought an acorn home from a walk in the woods. It was a particularly pleasing example–large and burnished brown, with a handsome cap. I though that having this in hand, and later, desk-side, might help me to get going on what was then a rather vague idea about a book on time in nature. Time passed, and still the acorn sat there, not seeming to blossom into much. But, eventually, more ideas accumulated and I had a book. What mattered was that I had faith in the seed; that I cared enough to bring it home and welcome it.

I rooted around in my jewelry box to find the pendant pictured above, and remember Mom gifting me with it from her own childhood collection, when I was 9 or 10. She said, “If you have faith the size of a grain of mustard seed, you can move mountains,” a paraphrase from Matthew 17:20 and no doubt a remnant of her Baptist roots. Did she know how fertile a seed she was planting that day?