Last weekend I learned that my sister’s husband Randy in Vermont had needed emergency abdominal surgery and then suffered a stroke. Our family had to be in Mount Tremper, NY, at the Zen Mountain Monastery. I was astounded by the beauty of the snowy woods and especially taken with the woodpecker holes that “decorated” so many of the trees. I knew that Randy would appreciate the woods and the snow and the cozy library (happy to report that the latter has a very robust nature section! My time there has also inspired a piece). I tried to take in all the quiet beauty and somehow transmit that, telepathically, as a healing energy.

Monday found my sister Linda and me sleeping in a surgical intensive care waiting room, while Randy began his gradual recovery. Things were dicey but already looking a bit better. By the time I got up to the hospital, Randy was starting to rouse and look around, speaking hoarsely and sleeping for long intervals.

I was glad his room had a large window. We watched the snow and talked about the size of the flakes. I watched large chunks of accumulated white mounds fall from the ledge. We checked on the progress of the Nor’Easter and were not, by Vermont standards, super impressed. Linda and I would be able to get to a nearby hotel the following nights. But I was impressed enough to delay my 4+ hour drive home an extra day, especially after watching news reports on the storm’s temper fit in Massachusetts. 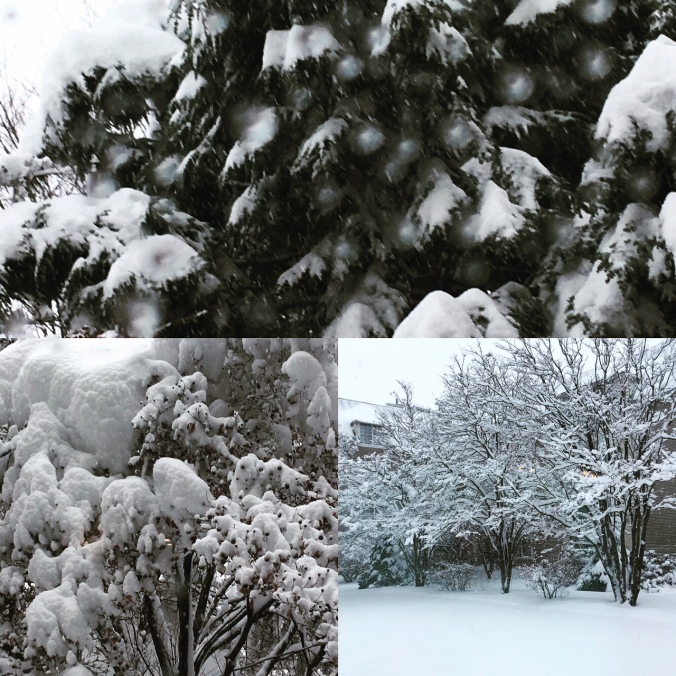 The several days at the hospital  limited our contact with the outdoors. So I did the next best thing! I read about being outdoors. Edwin Way Teale published Wandering Through Winter in 1965 and won a Pulitzer for it the following year. My edition, which I acquired during a special day in Woodstock, has a slightly musty smell. But I treasure it and am glad that I threw it into my hastily packed bag.

The book was full of funny coincidences that ran parallel with my own life. In the book Edwin and Nellie drive, in a fairly zig-zaggy pattern (gravitating to natural points of interest with the only real “deadline” being the end of the winter season) from California to Northern Maine, and it just so happened that the part I was up to when I arrived in Vermont was about Vermont. The chapter was called “Snowflake Country,” and the first sentence talked about Lake Champlain, which, if we craned our necks, we could spot from Randy’s room. A flat blue wall sculpture near the lobby illustrated the shape of Champlain in aerial-view detail.

A four-page photographic insert in the Vermont chapter celebrated blizzard snow and numerous animal foot and even tail (opossum!) prints in the white stuff.  The photos reminded me of the arresting beauty Linda and I happened upon via the hotel courtyard window as we hurried from our room to the front desk.

After Champlain, Teale turned his attention to Wilson Alwyn Bentley, a name that locals recognize as The Snowflake Man. Teale quotes the Book of Job upon introducing him: “Hast thou entered into the treasures of the snow?” Bentley was the first to photograph snowflakes in great detail. I love this part of the narrative:

“His was a poet’s emotional response to the beauty of the snow. Long years afterwards he spoke with regret of one particular flake, one of the most beautiful he had ever seen, that broke before he could record its image. ‘But beauty vanishes, beauty passes, however rare, rare it be,’ and the snowflake is beauty in its most fleeting form. Its fragile ice shatters or melts away and no one will ever see its like again. Its design is lost forever.”

It was good to be reminded of this precious and quite stunning individuality hidden in the wet clumps I would later be pushing off my windshield.

The Teale book next steered me toward home long before I got on the road. After a delightful chapter about Sugar Bush and maple sugaring (a practice that Linda and Randy have adopted on their own porch), Edwin and Nellie drove down to Essex, Connecticut—the next town over from my own Deep River. These days, it’s a wealthy town high in curb appeal and tourists, but also a pleasurable stop for locals which offers generous access to the river, the Connecticut River Museum, and other adventures like eagle watch cruises and a big deal about Groundhog Day. But Edwin and Nellie, in the 1960s, were drawn to the town because of the E.E Dickinson Company, “the source of most of the world’s supply of witch hazel.” (At least at that time!). The company has since moved to (or been blended with) a company in East Hampton, under the name American Distilling, and continues to churn out the stuff.

Snow on Witch Hazel courtesy of I AM I.A.M. on Flickr

Teale wrote about “brushmen”—guys who gathered the witch hazel plant in the woods. He followed the most accomplished brushman of his day, Stanislaw Gula of Hampton, Connecticut (where the Teales lived), as he hunted and gathered. Teale described witch hazel as “a botanical individualist…not linked with any special environment. It grows on dry slopes and hilltops as well as in wet and swampy wetlands. At times, the clumps appear singly and widely spaced; at other times, they cluster together like alders in a swale.” I was tickled to look up American Distilling and learn about certified wild crops and sustainable harvesting over 30,000 acres of land approved for harvest. I’d love to go see it sometime and ask about what may have changed since Mr. Gula’s day.

Randy, even in his recovering state, was able to converse a bit about the beauty of the yellow witch hazel plants in he and Linda’s woods back home in Middlebury. He possesses a wealth of knowledge, so also knew about what Teale described earlier in the book as “the diamond fields of Arkansas,” which the Internet now bills as Crater of Diamonds State Park. It was fun to sit in that rather sterile room and talk about some wonders of the world.

We are so grateful that Randy’s mind and personality remain 100% Randy and fully capable, and that his speech, although quite faint for a while, has not been affected by his stroke. The book I was reading at the hospital conveyed miracles of one sort, but a whole other variety of miracle was happening, for all of us, as so many reached out to us with help and prayers and vibes and concrete resources. (And the medical care is a whole other miracle of its own). I started a GoFundMe campaign to help in the face of long-term lost wages—so much support pouring in from not only beloved family and friends, but friends of friends of friends and maybe some strangers, too! How heartening to feel so blessed—by books and family and by the kindness of so many—in the midst of the last throes of winter.