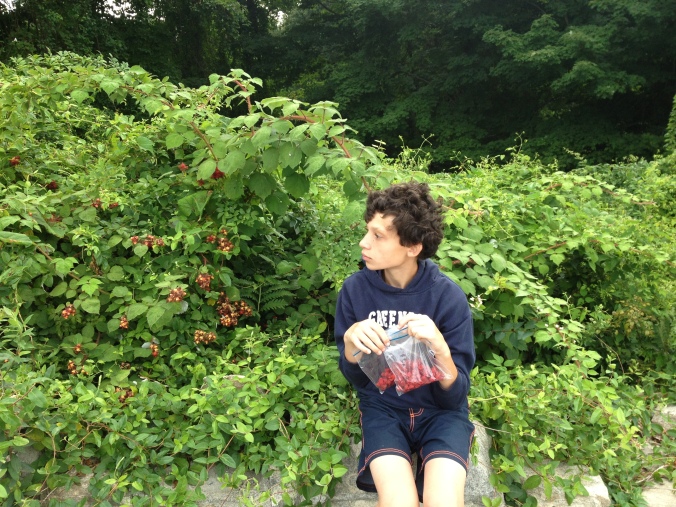 I’ve got to give my son Gavin credit for this blog’s title, and top billing in this week’s photo, too. He mused aloud that we were “rich in raspberries” as we industriously filled two sandwich bags with our picks from a tangle of roadside bushes. They were a bit of breakfast, and later, at the close of the day, dessert with whipped cream.

We had to consult a friend to be sure the berries we saw springing up everywhere were safe. Our Backyard Foraging book neglected this particular species, and I was seriously afraid that there might be imposters that looked and smelled like wild raspberries but were actually an artfully disguised malevolent toxin that would leave us gasping for breath. But once we got the all clear, the worst thing that happened was a little patch of poison ivy on Gavin’s arm, a small price for the juicy pleasure of the experience.

On the way up the hill to our best picking spot, we saw a wealth of small birds and a duet of deer, and realized that they, also, were probably relishing the seemingly unceasing red harvest. Something about eating right from the bush, and about sharing the joy with a bevy of creatures, made the berries taste that much sweeter.

Amidst the satisfying pick, I also felt sad when thinking about how removed from the land most of us have become. On the other hand, there remains a stalwart cadre of faithful kitchen gardeners, and foraging seems to have picked up in many sectors, to me a powerful sign of the collective desire to reconnect with the good earth. Recently, I took great pleasure in the book Closer to the Ground, particularly relishing its tales of a family’s catches from the Pacific Northwest waters and coastline.  I thought back to a piece I wrote years earlier surrounding an older book by Nelson Coon, called Using Wayside Plants. Coon was inspired by William Miller, a hobo who dug himself snug places to sleep below the snow, tapped sugar maples with hollowed elderberry twigs, and chewed black birch bark to stave hunger. The read was rich with recipes for sorrel and nettle soups, ink cap mushrooms dug from the roots of trees, clover bloom vinegar, elderberry waffles, and the piece de la resistance —Irish Moss Blanc Mange.

I’ve never had the pleasure of tasting this dish, but I see that Coon’s Irish Moss dessert wasn’t as rare and exotic as I imagined—Fannie Farmer included it in her famed early 20th century cookbook  and a much more recent Block Island cookbook  also put it on the menu. I love the Haiku-like simplicity of how the recipe starts:

Gather fresh moss on the beach.
Rinse well in cold water and
Spread in the sun to dry.

Whether I’ll ever gather sufficient moss and stick-to-itiveness to make such a dish happen, I can’t say. But it does make me appreciate the abundance of both land and sea, and long for the harvest that happens so much less often these days at the individual level, but is there for the taking. The satisfaction it yields is as filling as the food itself.

(A shout out here to my nephew Will, too, who has inspired me with his artful foraging! I still want a mushroom lesson).