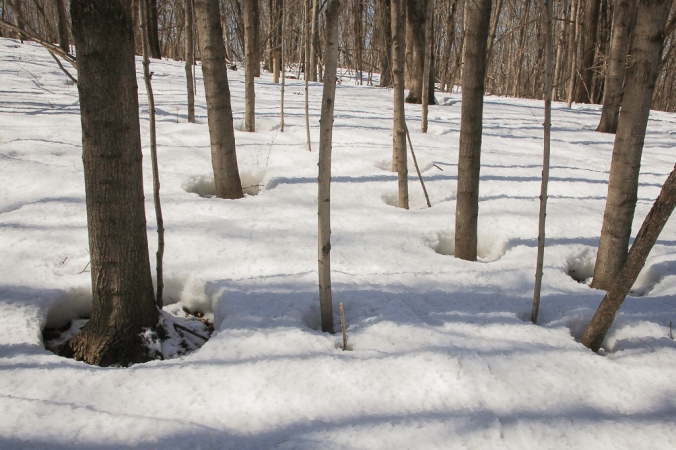 We’re sharing a good book in the family. Backyard Almanac  gives an entry on “Northern natural history” for every day of the year. Technically I think the “Northern” to which the author refers is more in the vicinity of upper Minnesota and Southern Canada, but close enough—most of the milestones and species are something to which we here in Deep River can relate.

The entry for March 1 was about tree circles, one of many natural phenomena of which I have probably on some level been aware but hadn’t thought about too much before. Larry Weber writes:

The sunlight reflects off snow, but not off dark tree bark, which absorbs heat from the lengthening light and gently radiates it back to the surrounding snow creating ‘tree circles.’ Snow melt may extend out from the trees…to as much as a foot. On tree trunks, plants like mosses get a peek at sunlight for the first time in months, and animals so long beneath the snow have an opportunity to emerge into fresh air and daylight.

I got excited about impending spring plant life resurrections when I Googled around a bit more about tree circles. A Q &A in an archived New York Times Science section reminds me that “Some emerging herbaceous plants, like those growing from bulbs, produce heat to melt snow in order to more easily break through it in the springtime…This is most famously true of skunk cabbage, Symplocarpus foetidus, likely our earliest-blooming herbaceous native…Some flowering trees also produce heat, likely to melt frost or snow present on their buds.”

I was tickled by the tree circles topic because it’s unique and a little offbeat and warm, but as Ecclesiastes reminds us, there is nothing new under the sun. Here’s a great blog on the same topic, but I can’t be too jealous of these authors getting there first, because they are a pretty fascinating bunch who seem ultrasmart and science-y in ways that I will never be (but deeply admire).

Unlike these scientists, I will not be intensely studying or positing theories of evolution or alternatives to it. But I do have something in common with them.  I will be PAYING ATTENTION, especially to those tree circles. (I checked today—there are not yet ripples of shallower, soil-tinged  snow popping up around my pines and oaks. But temperatures are gradually trending in an encouraging direction).

Attention is the beginning of devotion.

Olivia Newton-John also said (well, sang) something well, about being utterly and Hopelessly Devoted. That’s how I feel about spring at this point. Hopelessly devoted to the promise of tree circles and the spring that will expand around us as they move outward into the sun.