Today I checked off a longstanding item on my bucket list of local endeavors. I jumped into my jeans and hurried out of the house to be in Madison by 7:50, where I met with fellow bird lovers in The Audubon Shop parking lot. I met author/illustrator Patrick J. Lynch, and he autographed my new copy of A Field Guide to the Long Island Sound. I’ve lived on both sides of the Sound, traversing many of its rocky beaches, and it seems only fitting that I should, at long last, own a detailed manual about its non-human inhabitants. The group formed a caravan at Hammonasset Beach State Park, driving short stints to favorite bird haunts in the park and learning from Lynch and shop owner Jerry Connolly.

The Purple Martins filled my heart. The sheen on the males caught the light, and the couples seemed to be performing a musical for our benefit, flying to and fro as we stood with our “opera glasses” and took in the spectacle. I learned that they winter in South America and come back to the exact same “condo” bird houses every spring, where they nest in great colonies. When I looked them up later on All About Birds, I learned that man-made Martin houses used to be really abundant. John James Audubon used them as a gauge for his lodging prospects when traveling, noting: “Almost every country tavern has a martin box on the upper part of its sign-board; and I have observed that the handsomer the box, the better does the inn generally prove to be.” Should we start a movement to bring back the universal Martin box, especially at inns? Wouldn’t looking for the birdhouses be infinitely more fun than hotel ratings Web sites?

I was taken with a modest, marshy pool adjacent to the pavilion’s parking lot. Although we only spotted a few tadpoles, Lynch gave us a lesson on Fowler’s toads, which, unlike the better-known American toads, like to hang out in sand dunes. His book says that they bury themselves in the sand to escape the heat. How many Fowler’s toads did I unknowingly step over as I roamed around Jones Beach and Point Lookout and Caumsett and Welwyn Preserve in my youth? As we learned about the toads, a flurry of bright blue tree swallows stole center stage, appearing to perform for us but in actuality chasing insects. The morning brought more finds, including Least Terns (endangered) and American Oystercatchers and Brants. I couldn’t work my phone camera by the end of the walk, as my hands were surprisingly numb from the wet chill. But it was worth the temporary paralysis. 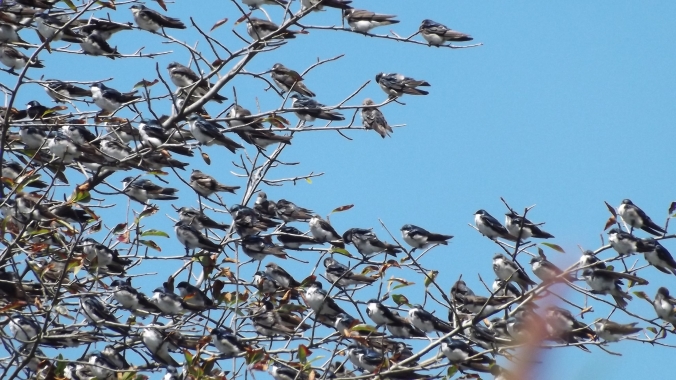 Embarrassment of tree swallows courtesy of Michael Mulqueen on Flickr

On the way home on Route 9, warming alternate hands over the heating vents, I once again noticed a particular, still quite bare, tree, which boasts the most tent caterpillar abodes I’ve ever seen in one place. I looked up the Eastern Tent Caterpillar, and found what I expected on a college entomology site: Malacosoma americanum is described as a pest with “unsightly silken nests” that feeds on (but doesn’t usually defoliate) trees, going on to say that “they are a nuisance and can create a mess when they are squashed on driveways, sidewalks, and patios.” Those lucky enough to survive our feet and cars and predators (which I bet they consider a nuisance, at the very least!) transform into rather ordinary-looking moths.

The tree caterpillars reminded me of gypsy moth caterpillars, another one of God’s “creatures great and small” often viewed as an outcast, despite the fact that ominous sounding “outbreaks” are very often limited by nature, such as the fungus that counters the gypsies. (I wrote more about gypsies here).  Both tree and gypsy moth caterpillar eggs overwinter under ingenious protective coatings, and it seems miraculous to me that they make it to spring at all. In The Book of Noticing (officially launching Tuesday!) I wrote about peering and tracking and researching “even the common gypsy moth,” and this reminds me that, despite my generally sympathetic attitude, I don’t necessarily fully value the lives of the moths who lay their eggs and flutter to the ground to die each summer, at least not on par with other, usually bigger and more visually pleasing creatures. This is something for me to think about. Can I cut off the branch of my neighbor’s tent caterpillared-tree and bring the innocents, just doing what they were born to do, off into the woods somewhere, far away from the garden, sparing them from destruction? 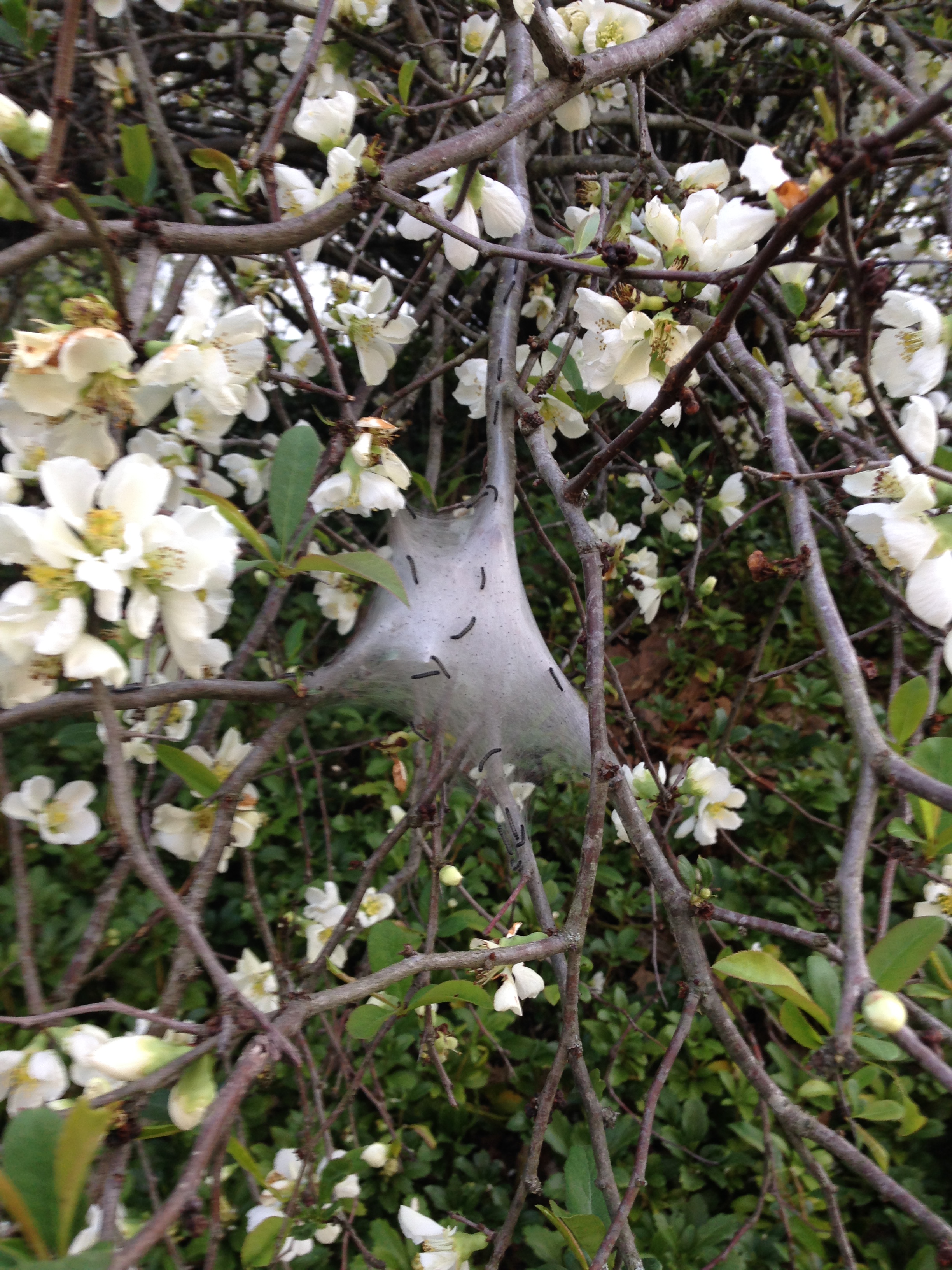 Caterpillars are not pretty in the same way that Purple Martins are. But they fascinated me when I was a child, their suction-cuppy feet traversing my arm, tickling its tiny hairs. Can we make more room in the world even for creatures who don’t make us want to cuddle? Even for those creatures, like many-eyed or hairy-legged spiders, who sometimes make us want to run? They are living their lives, too, and have their place. They, like us, can be so misunderstood. Could they teach us more about compassion?

As I wrote this I kept hearing a small vibrating noise and assumed it was rapid raindrops riding the edge of the gutter. But my eye caught a white moth here inside, fluttering her wings at an impossible speed. Was she trying to dry off? She rode my forearm for a while, then lifted off to the windowsill. Another small creature who so often goes unnoticed, and this one has already been through several stages of her life, like me. She catches the light beautifully. She craves it just like I do.

5 thoughts on “In Praise of the Small: Swallows, Dune Toads, and Caterpillars”