Last winter, I succeeded in becoming a bit hardier for winter walking, with the help of long johns and other snug layers. I learned that, despite the instinct to avoid the cold, there are long, interesting walks to be had on all but the chilliest and snowiest of days. With caution, of course. I had 2 friends who injured their arms by slipping on the ice; they, too, had been determined to get outside no matter what!

In a minor ironic twist, now I am prepared to layer up and get out but I am not supposed to bear weight on my foot. I am impatient about this, but yet again relearning the old lesson that there is something to notice, something to see when I get in the mindset to find it. The suet hosts the occasional Downy Woodpecker but it has been mostly quiet. What, then, is that hint of a movement on the ground below the feeder? Only with my binoculars can I discern a duo of song sparrows, who blend in so well with the dark leaf litter. They are hopping about, sporting those handsome striped heads. 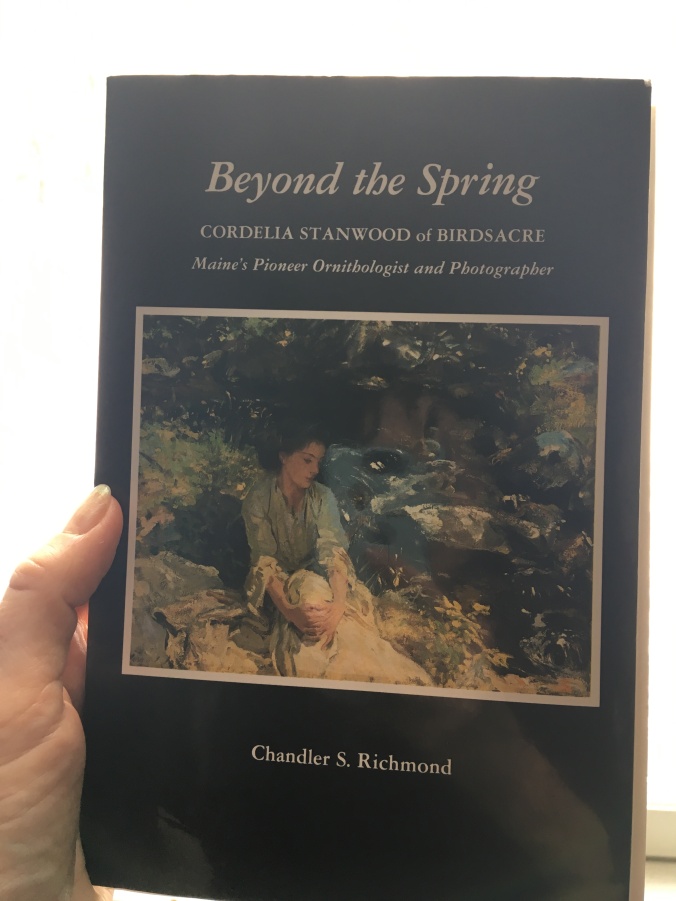 I watch Gavin walk back into the woods with envy and turn towards my new friend Cordelia. Well, the book about her, anyway. I bought Beyond the Spring during our family visit to Birdsacre in Ellsworth, Maine, this summer. Cordelia Stanwood isn’t exactly a household name, but I am so glad to be learning about this kindred spirit who died at 93, about a decade before I was born. The first 40 years or so of her life were typical for a single woman of her time who had the support of family and some resources at her disposal. She spent many years teaching and continuing her schooling. That is, until her nervous breakdown. She was back home with her parents and brother after this, and it sounds like for a while she lived a rather numb existence.

Her biographer, who based much of what he wrote on the voluminous papers she left behind, wrote about how she reunited with the world after her illness:

…One day while looking down the long hill below the house she had become aware of the rugged peacefulness of what she saw: the flat smoothness of snow-covered fields on either side of Card’s Brook, the lazy blue smoke curling up from the chimneys in town, the purple outline of the hills in Dedham silhouetted against the rosy tints of late-afternoon sky. Suddenly she felt as if a great weight had been lifted from her shoulders, and when a gull sailed majestically through the golden rays of late sunshine she had smiled and whispered to herself, “Oh, world, you are there after all. You haven’t changed. It is I who have been away, and you have been waiting for me all the time.”

Cordelia repaid the waiting natural world with countless hours of watching its birds and taking their photos. Today, you can visit Birdsacre and read some of Cordelia’s words as you walk the trails: 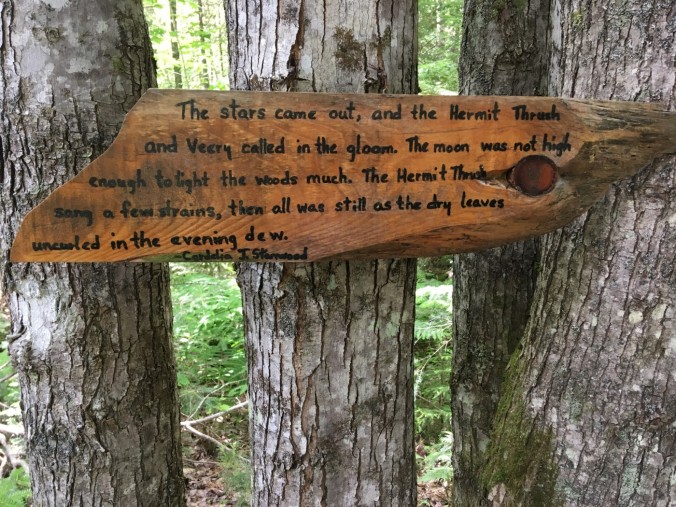 You can visit the injured birds that are referred to as “permanent guests” there. In the Nature Center, I was especially taken with the Merrit Fitch egg collection (more than 58 species of birds’ eggs collected by two teenage boys in 1888). AND with the dead man’s fingers that grew near the fence. They were the pièce de résistance of the pathway back to the car!

During these quiet, snowy days, I like to think back and imagine Cordelia’s reawakening to nature as she looked out over the snow. I like to think about how this possibility is there for us every single day. I have many times felt that recognition, that delight as I looked at a bug or a leaf or a bird—that deep knowing, as Cordelia did, that the world is always waiting for us. We just need to rise up to meet it.

3 thoughts on “The Long Winter, Cordelia, and Dead Man’s Fingers”