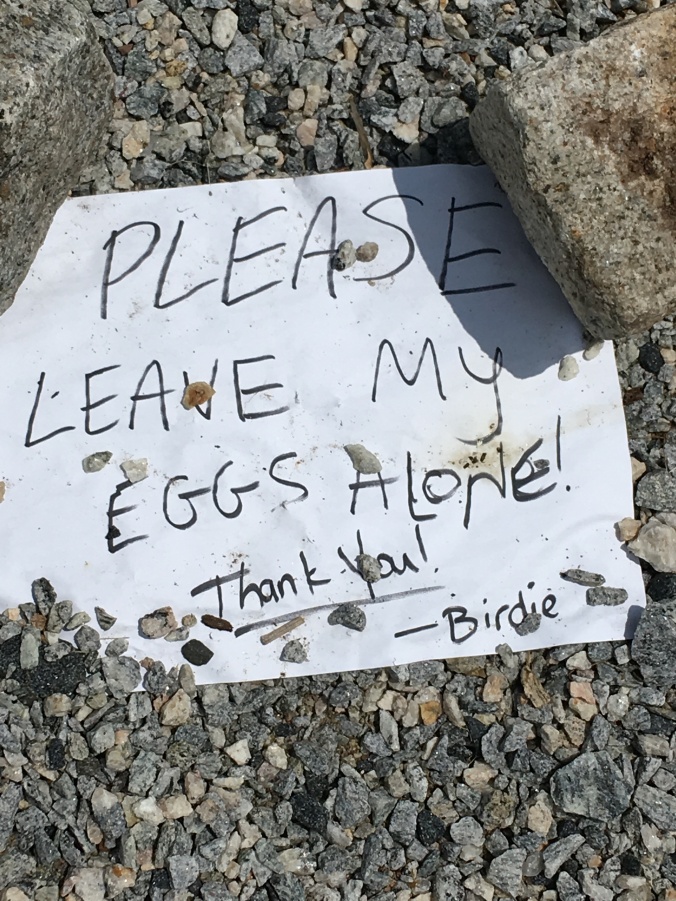 On Saturday, I went to see an old friend: the natural world! I’d only been able to visit her for short stints in recent weeks. And the timing was great— it was Trails Day (well, Trails Weekend, really) in Connecticut, something I’ve missed in past years because of competing demands. (Actually, according to the CFPA, our state has the largest Trails Day nationwide!)

I had an additional motive for making some nature immersion plans: as an apprentice Master Naturalist, I have requirements for – in addition to classes – finding opportunities to participate in and also help out with ecologically related education.

By the time I got my act together that morning, I had just enough time to hastily groom and get myself to Killingworth, where several folks from Connecticut Water were leading a hike in the vicinity of the reservoir. Our group was a mix of younger families with children, singles old and young, a leashed dog, and our leaders. The woman in front of me confessed that this “outdoorsy” adventure was a new sort of endeavor for her. She worried that her slower pace might hold me back, but I welcomed it. I was feeling the humidity (a foreshadowing of the sudden storms that would erupt that afternoon), and appreciated the ability to really look at the foliage, the bark, the bugs, the light on the meadow, etc. My knees thanked me for the leisurely stride, too!

The water company folks were good guides. They talked about maintaining the watershed, and about the herons, ospreys, and other local bird life. Our leader Chuck pointed up and cocked his head, indicating the song of the Red-Eyed Vireo. More than one nature guide has told me that this muted olive-green and white bird is often heard but seen much less often (great camouflage, especially when the trees are fully leafed). I pointed out circular Downy or Hairy Woodpecker holes, knowing that holes from the Pileated are much bigger, and more rectangular, and Yellow-Bellied Sapsucker holes are in a neat row. We admired a very shaggy shag bark hickory, with a “Do Not Trespass” sign on it signaling the protected area closer to the reservoir.

When we got back from the hike, there was a group photo to commemorate our success, and free bags and water bottles from our hosts. I wondered how disheveled I would appear in the photo, as I hadn’t managed to shower before I ran out the door and was wearing the humidity on my face and neck.

(I hadn’t thought much about it before, but Connecticut Water is actively involved in conservation—protecting their water source! They have an education program for third graders—the Water Drop Watchers!)

Bedraggled though I was, I knew that I couldn’t pass up my first visit to Lavender Pond Farm down the road. They have about 9000 lavender plants, of many varieties.  The plants were not yet in full bloom (that’s coming soon!) but the place smelled heavenly. I started my visit in the store, thinking of my sister Linda (a sucker for anything Provencal, and the whole store looked like one I might imagine in the South of France). I quenched my thirst with a cold lavender lemonade and bought mix for a lavender-lemon tea cake, as well as honey-lavender candy that Gavin would consume in record time on Sunday.

But the biggest treat was yet to come. I stowed my purchases in the car and walked among the plants. Already, on the way in, I had admired several Brown-Headed Cowbirds  skirting the fields. Now, I walked out onto the grassy lawn surrounding the lavender patches, interspersed with gravel paths. Swifts (or were they swallows?) flew too fast for my amateur birder eyes to completely take in, but I knew they were hunting for insects. And then, an unexpected type of bird motion caught my eye.

I saw the quick, spindly steps of a shore bird (although I wasn’t on the shore). A pair of Killdeer (so named because of the sound they make although I do NOT hear this phrase when I hear their song) were running around among the lavender plants and gravel. When I looked these birds up later, the first sentence in the “All About Birds” entry for this species was, “A shorebird you can see without going to the beach.” Indeed: they are plovers, described by All About Birds as, “tawny birds” that “run across the ground in spurts, stopping with a jolt every so often to check their progress, or to see if they’ve startled up any insect prey.”

I admired the handsome black rings around their necks and upper chests (technically called “breast bands”) and also how well they blended in with the ground. My delight only grew from there. I learned that the pair was guarding a cache of four eggs on what looked to me like a very randomly chosen ground “nest”—really just a scratched out spot amidst a large swath of gravel. Some kind soul had made a crude surround for the nest, and the sign that heads up this blog, signed, “Birdie.” I didn’t want to upset whoever was on “egg duty” (males and females take turns with that) but I did swoop in for a quick photo-op while the prospective parent hovered nearby and made a few anxious squawks.

What a Saturday—by one or so I’d walked for miles; seen a dozen creatures; made some new, nature-loving friends, and all before the sky opened up to dump buckets of rain! The Killdeer incubation period is a short one—less than a month. Maybe I’ll get to soon see some Killdeer chicks!

2 thoughts on “My First Killdeer”